Activities that follow the talk. These give space to reflect further and apply the passage to life. Some care done as ‘Stations’, with several around the room and people choose which to do. Others are ‘Table Based’ activities where every table works together on a single activity.

This station can be as simple or as complicated as you like. As it was Easter Sunday we made a big effort the day before to create something that looked as good as we could make it (there are photos on the last page of this document). If you don’t have the resources or time you can still put together something simple that will work. It should be a space where a few people at a time can sit and reflect quietly.

Explain that the empty tomb is a space to quietly reflect on what God has done and how, in defeating death Jesus changed everything.

Quotes/Verses To Print And Cut Out:

Wherever there is death, wherever hope is buried, wherever evil triumphs over law, and wherever law triumphs over grace, wherever injustice, unkindness, and arrogance are winning, just wait. It’s not over yet. Rob Bell

“You don’t have to wait for the End. I am, right now, Resurrection and Life. The one who believes in me, even though he or she dies, will live. And everyone who lives believing in me does not ultimately die at all. Do you believe this?” John 11:25-26

Jesus’s resurrection is the beginning of God’s new project not to snatch people away from earth to heaven but to colonize earth with the life of heaven. N.T. Wright

The resurrection completes the inauguration of God’s kingdom. . . . It is the decisive event demonstrating that God’s kingdom really has been launched on earth as it is in heaven. The message of Easter is that God’s new world has been unveiled in Jesus Christ and that you’re now invited to belong to it. N.T. Wright

The devil, darkness, and death may swagger and boast, the pangs of life will sting for a while longer, but don’t worry; the forces of evil are breathing their last. Not to worry…He’s risen! Charles Swindoll

Some pictures of the Zone2 Tomb for inspiration: 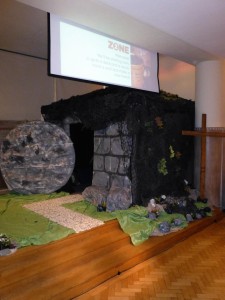 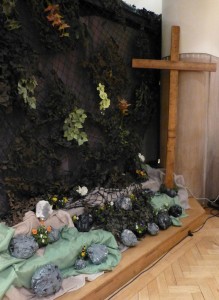