On Thursday 11th November I headed into town to meet Revd. Canon Roger Simpson, our visiting Evangelist, for the first of a series of monthly Mini-Missions with the Joshua Centre. Outside the ticket office in Lime Street Station, a small cluster of familiar faces gathered around a young looking grey haired man. Excited, but slightly apprehensive about the morning ahead, I wandered over.

As we pulled some chairs around a table in the nearby Wetherspoons, I remembered how I’d spelt the pub’s title wrong on the invitation, only to be later informed by my husband of my misdemeanour. I’d met everyone before, thankfully, and introduced my husband, who I hoped wouldn’t embarrass me too much in front of my work colleagues. 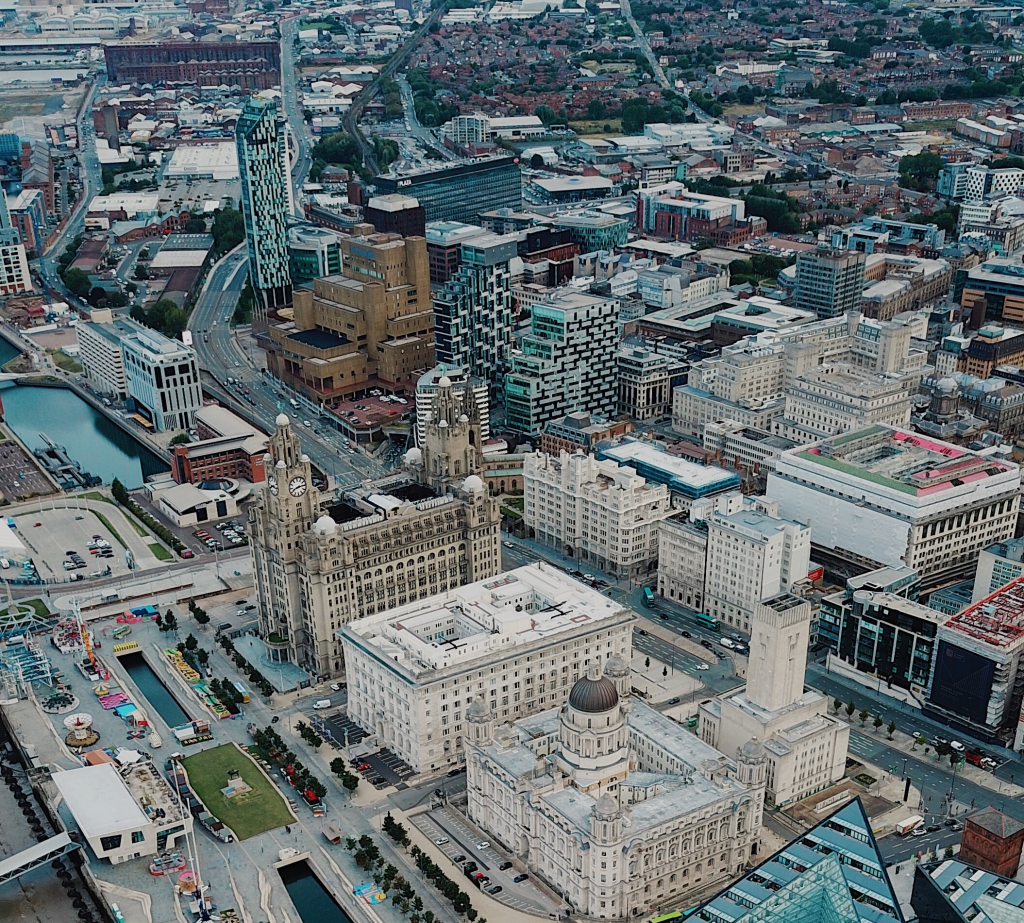 Roger, as it turned out wasn’t quite the stereotypical ‘Church of England’ Vicar that I’d had in mind, but was actually quite chatty, informal and a story-teller of sorts. I was comforted that after a year of not having to make small-talk, I wasn’t going to have to carry any conversations. Roger talked briefly about some of his recent and past experiences out ‘fishing’ (his metaphor for outreach), in a refreshing tone that implied he thought we could all go ‘fishing’ too.

In appreciation of Roger’s optimism, I reminisced on some old ‘fishing’ trips, back in those not so distant times when one could share a thought without the fear of rejection or aggressive disagreement, which I’ve since come to know and actively avoid. As Roger kept sharing, I pondered how we might swerve the aggressive ‘it’s true because I said it is’ shut-downs I’m always seeing on social media these days.

Opening his satchel, Roger found some small pea-green booklets and some sheets of A4 with some questions on. In his time as the Evangelist to the Bishop of York, Roger had found that these surveys were a helpful way of starting up conversations about faith. The key to a good conversation, he encouraged us, was listening. Today, rather than filling space in our conversations with people, we would simply be repeating the questions on the survey and listening carefully to the answers. 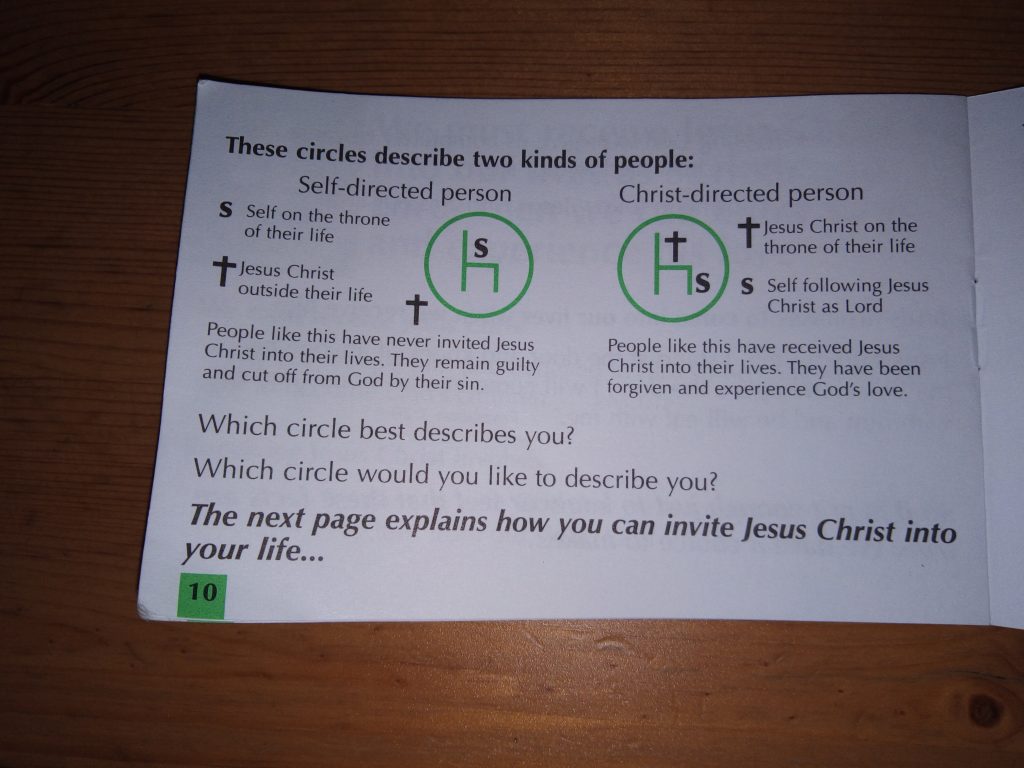 Flicking through the 5 pages of the green booklet (which we would give out to people who were interested after having completed the survey), Roger highlighted several parts  in the booklet, such as a picture of the self-centred sinner with themselves on the throne and the Christ centred Christian with Jesus in the driver’s seat (Figure 1). The pictures could be particularly useful for explaining deeper truths, he told us. So, in our pairs, and equipped with a clipboard, a pen, some surveys and several of the pea-green booklets, we ventured off into the city centre to find some people to speak with.

As we observed the two minutes silence for Remembrance Day at 11am, I wondered how many of the people outside Primark were thinking about why British men went to fight in World War II. Did anyone remember learning in history classes that at that time many men were motivated to protect our Christian nation, alongside its Christian values and laws? As the silence came to an end we were drawn to an elderly gentleman who was waiting for someone under the protective overhang at the front of Primark. Jim (not his real name) had previously been a church go-er, and still did go on occasion. He did believe in God, but He felt that many people had stopped going to church on account of the state of the world today and what a bad place it had become. He wondered why, if God does exist, He isn’t doing more about it. When we asked him whether he thought Jesus could heal people today, it moved Jim to talk about his wife who had passed away from a lymphatic disease, not long over a year ago and the autistic grandchild which he now often looks after. Jim agreed that we could pray for him and, after doing so, we thanked him and gave him a green booklet.

The next people we met in the same location were a couple who were in the initial stages of their relationship. Gemma and Anthony (again, not their real names), gave answers to the questions in a somewhat awkward fashion, revealing perhaps that they were on first date, after some brief online conversations. Anthony had recently been released from prison and said he prayed to God every day. When we asked him who he thought Jesus was he replied “my Lord and my Saviour”. Gemma was less convinced and felt that because she made her own decisions in life, that she was a God, of sorts, replying simply “me” to the same question. Although surprised, we celebrated when Gemma discussed the single time she did recollect praying, at the birth of her premature son who was now 17. She proudly told us how he was going to join the police force.

After asking the next man whether he had a personal relationship with God, we found that he was open to developing one. My survey partner discussed a diagram in the booklet which was about just that, and I was impressed by his theology. Leaving the green booklet behind I made a mental note to pray for his wife later, who was suffering from cancer. Following this, we continued, receiving a few flat-out rejections, as anticipated, as well as speaking to a Catholic lady who was quite unsure who Jesus is and a Christian man who wasn’t currently going to church, that we were able to suggest a new church to.

Back at Wetherspoons we traded our stories from the day. Roger and his survey partner had miraculously met two men who’d just been released from prison that morning or the day before. My husband and his partner had been able to talk to an alcoholic and give them the number for help at Teen Challenge. In addition to listening to the answers to the survey questions, the others had found the green book a helpful tool. We all agreed that having some simple diagrams was a good conversational aid. Everyone had seen merit in the survey and we were all excited to adapt and use it in our own contexts. What a great time this had been and what a privilege to be  able to be a part of it.

Thank you Revd. Roger for travelling up from Oxfordshire to equip us for this good work!

Revd. Canon Roger Simpson worked with John Sentamu as the Archbishop’s Evangelist for the Northern Province, and for 11 years as Vicar of St Michael le Belfrey in York. Prior to that he was the Rector of Holy Trinity Vancouver. He has led University and Parish missions all over the UK and abroad.

More information about how to attend Joshua Centre Mini-Missions can be found here.