Thus far, we have covered why we need to multiply congregations in some detail, and we have also explored why we often fail to do so. However, our discourse is not yet complete. It would be wholly inadequate if we were only ever to prepare for a journey, but never actually embark on one. Theory must eventually translate into practice. To help us do this well, we may need some practical pointers on how to go about things.

Nowhere is this more painfully evident than in recent church history. In the late 1980s and early 1990s, great enthusiasm sprung up about church-planting, as people started to believe that it was the most effective way of making new disciples. As a result of this belief (which, of course, I heartily share) a plethora of church-planting initiatives sprung up, many of which failed – sometimes fairly spectacularly.

George Lings and Stuart Murray have carefully examined what happened during this season in a Grove Booklet entitled: ‘Church Planting: Past, Present and Future’ [i]. One of their findings was that many of these church-plants were replete with faulty assumptions and inadequate methodology. They had often just replicated practices which had been employed successfully in other places, and expected local people to get on board. The local people were often not that impressed.

Conversely, Michael Moynagh has researched over 120 fresh expressions of church which have sprung up in the last 15 years, and documented his findings in the book: ‘Being Church, Doing Life’ [ii]. One of his key reflections is that there are six stages which most successful ‘start-ups’ pass through, and repeat. Moynagh calls these stages the ‘Loving-First Journey’, which are represented by six circles in the following diagram: 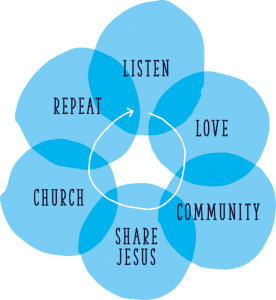 He is quick to highlight the fact that real life is always more complex than diagrams, and that each stage represented is thus unlikely to take place discretely, or in a linear sequence. However, he is also keen to point out that contextualising one’s approach by paying attention to local people, building trust and sharing power with them are more appropriate missional practices for our culture than those employed in the 1990s, and lead to more fruitful mission outcomes.

Placing the people you are trying to reach at the beginning of a church-planting process – before any other concrete plans have taken shape – is a stroke of genius. It avoids the mindless duplicating of church practices which meet the needs of the choir more than those of the parish (to use an analogy). It also circumvents the missional myopia which more careless and superficial observations of one’s context are more than likely to generate.

Likewise, placing multiplication at the end of a church-planting process – as a standard part of the journey, rather than as an optional extra for high capacity leaders – is a stroke of genius again. It embeds the expectation of multiplication in the minds of practitioners from the outset, just as some parents might share with their children their expectations of them (one day) producing grand-children. Making multiplication ‘the new normal’ makes it much more likely to happen.